THE COURT OF JAPARIDZE.

QUEENS OF THE COURT.

The Court of the Japaridze is a stunning mixture of characters. We all love the Queens and traditionally they have often been the only feminine characters in the court. These ladies are all adorned in the most amazing costumes. The Queen of Winds is a highly intelligent woman and in this deck appears to be an older and more mature figure than her King. There is a suggestion she may be divorced, she faces the King and would certainly hold her own. Often the Queen of Swords is cold and harsh which is interesting but perhaps not surprising that the Tarot portrays the woman of intellect to be cold and aloof.
The beautiful Queen of Fire pictured right,  is a gentle but independent woman of warmth.  She too faces her King but he is an authority and business tycoon who I doubt is a very emotive companion. He is a great provider whilst she walks gently and quietly with her lamp of light for all to warm by.
Queen of Tides pictured above is the illustration on the booklet that accompanies the deck. She really is lovely. Compassionate and caring with a beautiful cultural and loving King. This is the power couple of the deck in the love department. Anybody would love to hang out with them and would feel totally loved and protected.
Queen of Gardens is an authoritative woman, tall and dark skinned, almost intimidating but she represent business development and security in home environments. She is supposed to be an Earth Mother but her height and presence make her daunting or confronting. Maybe we need confronting on environmental issues. Her partner the King is beautifully costumed but I feel he steps behind her.

What an interesting concept for the traditional knights. Japaridze calls these Strangers and all the Strangers are non human type of characters. In this illustration of the Knight of Pentacles; Steve Lucas's interpretation is ambition coupled with endurance. I love this as a meaning for Knight of Pentacles. I always see the Knights as depicting a one pointed focus on the elemental make-up they represent.

The Stranger of Tides who I suppose is the Knight of Cups which I see as representing the lover in tradition, is in  Japapridze  seduction or temptation with a moody twist of jealously. I love the soul and raw humanity of this deck so I believe these strange creatures are adding a dual depth to our court. It is leaving the door open for the shadows to waft in. .

The Stranger of Fire is depicted as a Venusian type mask on a flames meaning travel and adventure with a touch of obsession and shallowness.

Stranger of Winds is analytical and logical without tolerance for authority. I love the depth of these concepts but I need Steve Lucas to explain them to me. The images are foreign and if left to my own devices I may find them difficult to interpret in the context of the Tarot structure.  I do though adore the attempt at deepening the concepts of the Knights and perhaps by calling them strangers it allows us to see our traditional Knights, who aren't perhaps our most popular of cards have a greater aspect to them because we often see them as shadowed, especially the Knight of Swords, in this case Winds; his arrogance is always apparent. I also love the twist on the lover adding some of love's deeper emotion to it as the card is very gender neutral.

The Pages are the Jesters.  Dressed in very clown like attire each of our jesters are beginners, young and stepping out into the world, They are all gentle, vulnerable and maybe at times misguided just as are our Pages. The Jester of Winds, a hooded figure is childlike and is accompanied with toys. The Jester of Fires is the most aggressive and clown like and has an intensity about his fascination for his skills. He also appears older than the rest of the Jesters.The Jester of Tides is feminine, she is a dreamy, wistful and a loving soul; which is different again as many modern Tarots have changed the gender of the Pages to feminine so they are often Princesses or  Daughters.  In the Japaridze there is one Jester who is feminine  and I actually think the gender of the others are neutral except the Jester of Fire is very masculine. Our pictured Jester of Gardens could also be feminine. This is a  trustworthy and beautiful soul so I'm told by Lucas's booklet. I do think they are a gorgeous beings. The Jesters certainly have a beautiful vulnerability about them.

Very few decks have every section perfect. In many decks I either love the Minor Arcana or the Major Arcana or the Court. I am a lover of the court cards as they are considered to be hard to read when first learning. Personally I think the court can be all you need in working through issues with other people. Its always a good idea to find yourself in the court and it doesn't matter if we are older, we still have days as the Jesters or some people we play out the Jester with. Its also great to find the partnership pairing in relationships. For example if the wife is a King and the husband is a Jester. Telling stuff.
Japaridze for me is a deck which grows on me every time I use it. It is not an easy deck to read as I rely on Steve Lucas's foresight often. Nino Japaridze illustration is sensational; there are so many facets to this deck. The court threw me with its Strangers and the depth they added. The Queens I adore for the women that they are and the Kings are interesting courtly men. The Jesters add a vulnerability and volatility to the youth of this deck.
court cards. Japaradize Tarot. 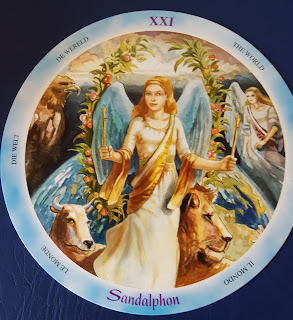 Raphael resides over the Lovers, Temperance is often the angel juggling the waters of emotion. The Devil is either Lucifer or Pan. Judgement has an angel dominating the landscape  And four archangels marking the four directions are in the Wheel of Fortune and The World. The Shining Angels Tarot by Giudetta Dembech and Artwork by Federico Pence is a deck designed to further educate us as readers to the extent of the angelic world and their role in magic, Qabala, healing, meditation and the spirit of our lives.
This is what we want from a new Tarot deck, we want to be educated; for the new deck to take us into areas we don't know about. This is a deck I would be inclined to work with for myself; I may add it to healing work I was doing with clients.
In the Shining Angels  Tarot, Raphael moves away from the Lovers leaving them to Haniel, archangel of Netzach of the Qabala whilst Raphael takes up the Heirophant. Luc…
Read more 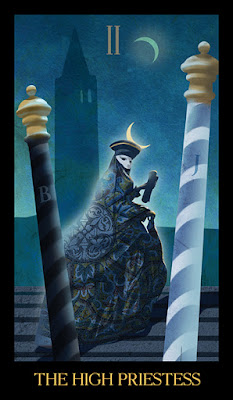 TAROT SET IN VENICE.
There are quite a few tarot decks set in Venice but they are not easy to get your hands on. This beautiful High Priestess by Eugene Vinitski and many other fabulously Venice iconic images can be found on Behance. Eugene is a Swiss illustrator and his work is magnificent. Is there an actual deck that I can get my hands on? I don't think so I suspect it is a deck in progress. I really love the deck so far.
To confuse the matter even more there is another deck that comes up with a very similar title. This one is produced by Roxana Paul and can be purchased from her website. This is a new trend for tarot illustrators to have their own web pages and sell the deck directly to the buyer. This is a good idea but these decks are expensive. Not that I don't agree with the price but it makes one think a lot before buying.
This deck by Roxana Paul is also a beautiful deck of  masked characters portraying the Tarot fraterni…
Read more 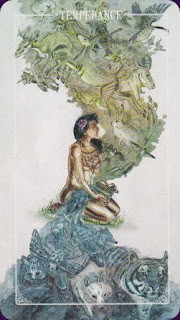 The accompanying book is beautiful too. Very concise with coloured illustrations of all the cards and a fabulous tribute to the i…
Read more
Go to www.addthis.com/dashboard to customize your tools -->